It all began five years ago as a fun little exercise, one silly little proof of concept that opened the door to a whole new world of possibilities. Ever since then, we have been dreaming, planning, and worrying, and now we are finally here, having started our very own game studio.

Brave? Maybe. Foolish? Definitely. But for us, the married geek couple who 15 years ago first bonded discussing the latest RPG, this path was the right one. We have never seen paper shuffling jobs as the best ending for us.

So now, after shuffling a mountain of papers learning about all the bureaucracy and the legal side of things, then shuffling the intimidating pile of papers needed to start our company, all we have to do is regularly shuffle the eye twitch-inducing amount of papers needed to run our company! Once that's all dealt with, maybe we even get to make games! Games!!! Please, just let us make our games.

Worst case scenario, our Paper Mountain of Despair was conquered for nothing (except the XP of course) and we don't sell a single game, but right now we can't help but feel optimistic. We are working on several projects that we are feeling confident about, and we've got several more ideas lined up after that.

Within the coming month, we will be revealing our first title, so stay tuned either here or follow us on Twitter for more regular updates and behind the scenes content. Adventure awaits!

We here at Rock A Role Games are excited to present our first game, Super/Human Identity, a narrative superhero game with light action elements and a strong focus on characters and group dynamics.

In the game, you are part of a group of superpowered individuals with no memory who find themselves in a fight for survival. With your past shrouded in secrecy and your future unknown, you must find a way to reclaim your identity, or define who you are anew.

With the game revolving around the relationships within the group, we wanted the player's choices to affect the group dynamics in a real way. Therefore, we decided to incorporate an intricate group dynamics system that will lead to great variability in how the group functions. Not only will you be able to develop your own friendships, rivalries, and romances, but everything you say and do will subtly - or not so subtly - influence your companions' relationships.

Each character will develop in different directions depending on your choices, resulting in different endings for them – if they make it that far. Will your choices lead them to ruin or salvation?

In the months leading up to the launch of our Kickstarter, we will be looking at a major feature or character from the game each week, so check back next Friday for the first weekly spotlight!

Define who you are!

The biggest allure of roleplaying games is interacting with a new world through a character you get to create. Deciding who they are, how they reason, and what stance they take on conflicts in the story is a rewarding creative outlet, as well as an exercise in empathy. Even if you are playing a version of yourself, you are exposed to philosophical dilemmas and thought experiments you would not encounter in real life, especially in fantasy and science-fiction, that sometimes lets you get to know yourself better.

It is therefore fitting that a theme of our first game is self-discovery. As the amnesiac main character of Super/Human Identity, figuring out who you were and who you want to be is a big part of the story. The player will have full control over what their character says in the game, with fully worded dialogue options rather than a choice of tone. There will be room to play your character and have them act, react and develop the way you want.

Part of creating the character you want to play as is usually customizing their gender and appearance as well. In Super/Human Identity there will be two avatars to choose from. However, on top of that you may choose your gender and pronoun separately, allowing for a wider spectrum of player character identities. Additional customization of appearance may also be available if our Kickstarter early next year is successful.

With a wide variety of conflicts, choices and outcomes, you will be able to make the story of Super/Human Identity your own by playing your role the way you want.

Subject 5 has been added to the game info page, check back next week for another character! 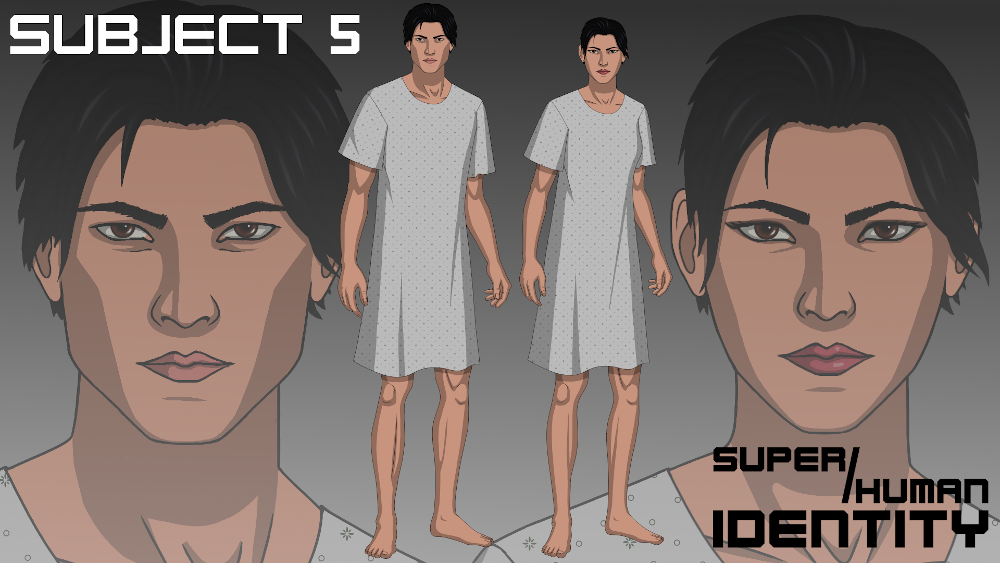 Already? Feels like an eternity. Wait, have we really been working for three months???

Visual design is lagging behind in favour of game design. (Who knew doing both would take twice the time?) Administration rears its ugly head more days a week than we were planning on. Things are progressing slowly, but at the same time in a better direction than ever.

The dynamic relationship mechanics are coming together wonderfully. The characters' possible fates have branched further but are still within a manageble number of permutations from a writing standpoint. A simple, sleek UI is in the works. Art happens occasionally, writing and coding more so. Extremely talented creatives have been enlisted. Life is good.

Admittedly, our original time plan has been proven optimistic. When setting out on this adventure we never took into account to plan for the unplanned, a valuable lesson to learn this early on. Still, with the added time our first project has grown and become better than we could have hoped for. As long as we can keep our ambition somewhat in check and set time aside for detours, we will still be able to finish Super/Human Identity late next year as planned.

In the first quarter of 2020, we will have a demo up on Steam in time for our Kickstarter, which will hopefully give us enough funds to fully realize our vision. In the mean time, expect increasingly regular updates on all the exciting things going on with S/HI.

Also, tune in to our Twitter for imminent announcements!